Technology is advancing at an increasingly rapid pace, and so should your marketing strategies. Because of the available technology, consumer behaviours are changing and these effects are also witnessed within the education industry. The number of campus visits have been decreasing at schools and universities in recent years as more prospective parents and students turn to the internet for information instead.

Now, having a strong presence on the internet is the only way to be visible. The automatic response to tackling this issue is the use of virtual tours as a platform to attract prospects’ attention towards your institution and its unique offerings.

Virtual tours are starting to catch hold among businesses and organisations everywhere, which include international schools and universities. However, most of them are a step behind in terms of enhancements. While it is currently the “in” thing to have virtual tours, many organisations fail to take advantage of the technology available and do not achieve to truly inform web visitors.

So, what is the difference between traditional virtual tours and guided 360 virtual tours, and why should you go for the latter for your institution?

Taking on consumer transformation and growth

The traditional virtual tour pioneered a new wave of marketing for many businesses, especially for those who depend on on-site visits by their clientele. People could familiarise themselves to a new location by viewing a series of 360 images. However, there were notable limitations to these features: 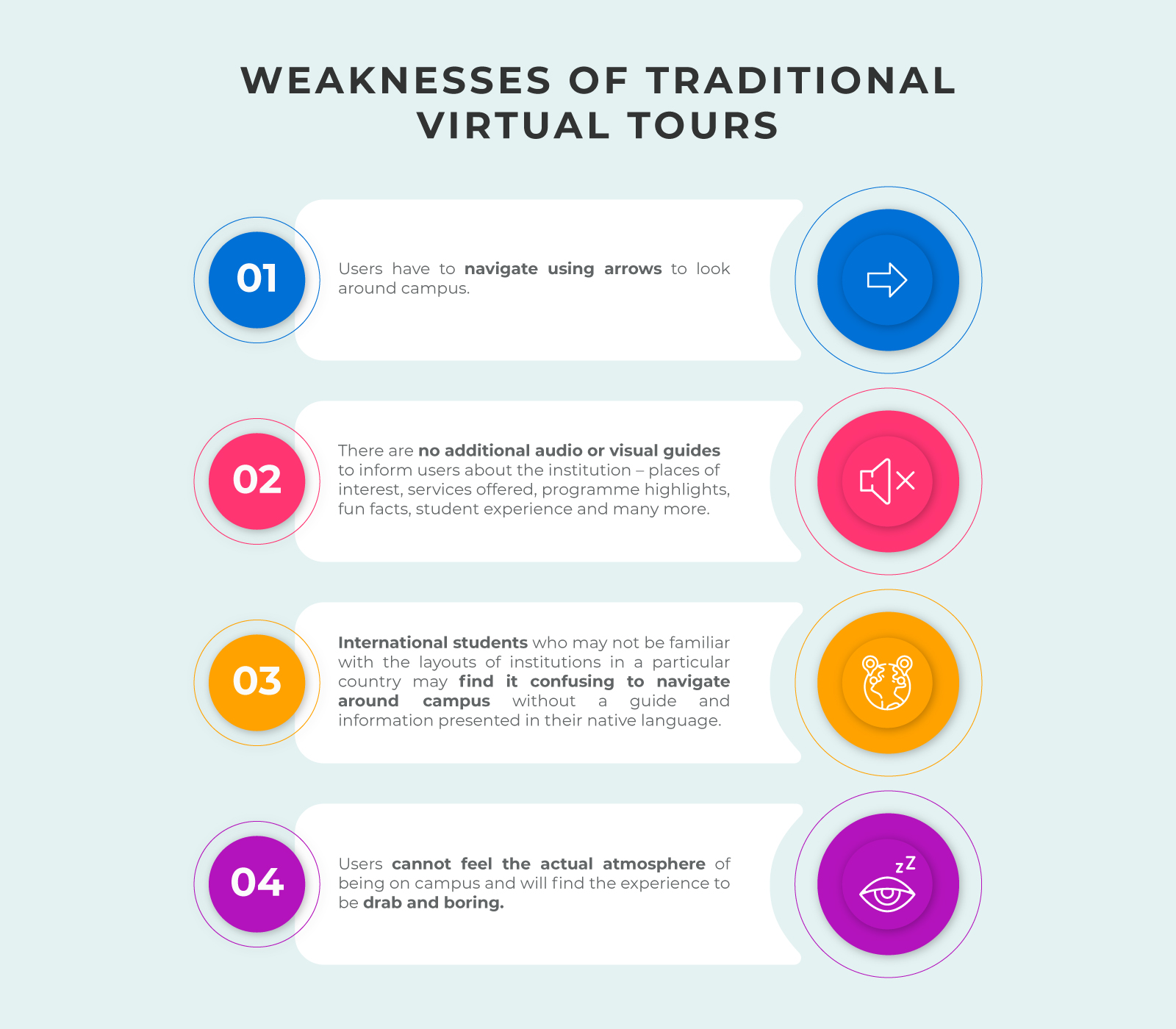 While these solutions may have been sufficient in the past, traditional virtual tours cannot keep up with the preferences of the younger generation who grew up surrounded with technology.

Millennials and generation Z are no longer satisfied with consumer – producer relationships that exist purely to make a transaction. These generation groups instead seek experiences and a more meaningful relationship with businesses they frequent, and organisations that succeed in building that relationship are often the ones that find success. For example, a case study done on the impact of a guided 360 virtual tour implemented for Georgia Institute of Technology found it reached prospective students from 84 countries, increased its engagement with students threefold, and a 28% surge in enrolment.

Hence, the newest trend for institutions to grab the hearts and attention of prospective parents and students are through the newly upgraded guided 360 virtual tours. Guided 360 virtual tours are intended to immerse the user into experiencing the location as they would in the actual place. With Covid-19 further dampening the number of institution visits and the increased usage of the internet for information, this is the next best thing to securing a relationship with your prospects and showing them what your institution can offer.

While the baseline of all virtual tours is similar, 360 degrees guided virtual tours add carefully curated content and details to enhance a person’s perception of the place and drives their imagination of actually being at the place. This is especially helpful for international visitors who have the choice to experience the location in their native language. In a learning institution context, it:

Your passion will be reciprocated

With the added advantages of guided 360 virtual tours, there is no reason to be satisfied with traditional virtual tours. Stay one step ahead and show the younger generation your passion and care for them, and how their experience at your institution is worthwhile. As the world grows smaller with the use of technology, guided 360 virtual tours are the next best thing to face to face meetings and conversations to bond with your audience.

Want to find out more about adapting a 360 degrees guided tour to your institution or business? Contact us here at info@xcalibur360.com.